It was a magical moment that printed itself into my heart. The fire of his eyes and the absolute brimming of his coat still haunt me- in the best way possible.

I had just moved into my new house! It is the kind of house that hates being abandoned, yet its closest neighbor is the horses in the field from the farm next door. Nobody had lived here for almost a year! That is beside the four mice that seemed to have taken over the duties of keeping this house company.

It was January, it was cold and the snow was thick and white all around. One early morning I got up to watch the sunrise. Sometimes this far North the only time you can get to see the sun at all, is in between sunrise and the clouds hanging in the sky. However, this remarkable morning there were no clouds at all. As I was watching the light grow from my window an amazing chase began. 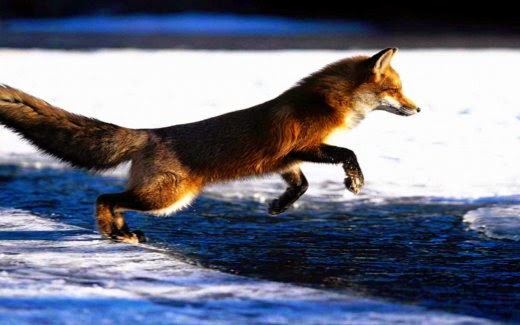 Fox jumping over water on ice.

Right below my window a hare comes blasting through closely followed by what might be the most beautiful fox I have ever seen. The later years the fox in this area has had a terrible luck of scabies, rabies, and heartworm. But this fox had none of the likes. He was bright red with an impressive white fluffy throat and exceptionally defined black-tipped ears and legs. His winter coat was brimming with vitality against the white snow. His strut certainly did not miss any confidence as he chased the hare with intense focus. The hare made a sharp turn into the trees that line the garden of my house and disappeared.

The foxed stopped, let out a little air and turned right back. Yet none of his self-confidence had seemed to leave him! He slowed down and began exploring the area that divides my grounds with the fields. He was right beside my window hideout. As there was no foliage I could clearly see him strutting about with loose paws, a high knee bend, and a high held facial pose. He looked as to equally enjoy the snow and the increasing warmth of the suns rays. He sniffed a bit in the snow and his coat seemed as if it were on fire in the glow of the rising sun. A fire that was matched in the bright burning in his orange eyes. He gently but with full confidence still, trotted back from where he had first come chasing that hare. I followed him around the house and hoped it wasn’t the last time he would show himself off like that.

What a welcome it was into a new house and a new area. This was back in 2012.