Let me ask you something…have you ever wondered if the raptors, the big birds of prey, like–Eagle or Harrier–notice you as an individual and track your whereabouts?

I’d never thought of it myself, that is, until one day when I came back from a visiting my favorite place in the nearby forest. I often go there to meditate. This particular day I noticed that a couple of Northern Harriers had moved into this favorite place of mine. Whenever I approached this area they began circling above the trees, high above my head, as if to figure out my intentions for coming there. I enjoyed them as I always do these great birds. But whenever I turned inwards and began meditating, they would calm down and go out of sight. They were never there when I came back out of meditation.

One summer it became really intense. They began alerting the whole forest to my presence. The minute I stepped off the track and began journeying in towards my favorite place, they would start to loudly call out. I have always loved listening to these birds, their calls seem to vibrate through my whole being. So even though I knew they were upset, I took it as a treat and tried to be as un-disturbing as I possibly could. They would rest in the branches not far from me and eye me down carefully. Sometimes they’d even shift branches as if to look at me from all angles. I guess they were making sure that I checked out safe. And of course, they would fly circling above me, still above the trees but lower than usual. They were on edge–that is for sure!

I assumed they had begun nesting in this part of the forest and my presence alerted them more than usual! But as soon as I began meditating they would once more relax and fall back. I am sure I still must have been under surveillance, but my silent presence for a short while had been accepted. 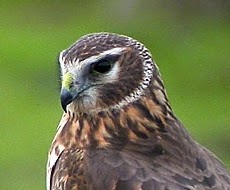 The morning after I wrote this piece I took my car and drove off to work. As I turned from my driveway on to the road a Northern Harrier sat right there on a railing at the edge of the road. I rolled down my window and greeted it. It took flight and flew alongside my car in the same height as my face for about a hundred meters. Again it made me wonder! It could easily have swooped right or left or over the car.
I think this is my closest encounter with these birds yet. Only a distance of a couple of meters between it and me! What a joy!

This happened a few times–same scenario over and over again! One day I began to wonder! How come they don’t get used to me. Their eyesight is supposedly phenomenal and they should be able to see even the tiniest of my freckles on my face from way up high. They must surely recognise me by now. I must admit, I started getting a little frustrated. Frustrated that they had not picked up on my careful ways and my lack of ill intentions. One day I even spoke out loud to them as I sat down for my usual meditation. I think I said something like, “Really! This is how it is going to be, this mistrust and warning every time I come here! Haven’t you gotten to know me by now, don’t you know you can trust me!” I even felt a little disappointed! All of my effort to blend in, not to make any offense was not working at all! I guess they were just as protective and alert as Northern Harrier parents should be. I couldn’t really hold anything against them. I just closed my eyes, let out a small sigh, accepted their insecurity and began meditating. After the meditation, I sat there for a while as I always do. It was quiet and as usual, they had left me alone. I got up and turned homewards. At that time, I lived just on the edge of the forest. So I walked slowly and as I had been deep in meditation my attention was still somewhat turned inwards. I didn’t take in the forest as I normally do. I was still in reflection on the emptiness inside of me; however, I did notice one of the Harriers circling a bit. I didn’t think anything of it, preoccupied as I was. Gently and slowly I took one step after the other and let my feet find their way home. Outside my house, I stopped, picked myself up a little, stood upright and took a last deep breath of fresh air before walking up to my front door. And as I did this one of the Harriers came gliding in ten meters above my head, further over the roof of my house and sat in a high tree just on the other side. My heart skipped a beat! Had it trailed me home? I swear it felt like it had been trailing me, tracking me even! As it flew in over me it seemed to say–ahh this is were you nest! As if it were telling me, we recognise you and we are aware! I remember that the hairs on my neck were standing upright with attention–an eerie attention of “how aware are these animals really?” Have I been that arrogant and blind the whole time, as to not see their depth of intelligence before now! I’ll tell you this much– nowadays around them, I never take anything for granted anymore! And I’ll tell you another thing– after this encounter, they kept coming around, circling me, and sitting in the branches around me before meditation. But they didn’t voice my presence anymore. They no longer alerted the whole forest to my presence. The forest already knew I was there anyway!

The morning after I wrote this piece I took my car and drove off to work. As I turned from my driveway on to the road a Northern Harrier sat right there on a railing at the edge of the road. I rolled down my window and greeted it. It took flight and flew alongside my car in the same height as my face for about a hundred meters. Again it made me wonder! It could easily have swooped right or left or over the car.

I think this is my closest encounter with these birds yet. Only a distance of a couple of meters between it and me!