The Wound of a Gentle & Loving Spirited Horse

We all belong to life!

This week I had an experience with a horse. The horse belongs to a friend of mine, or so to speak because in reality, it belongs to life, the same way our children belong to life and not to us.

This horse has caused my friend some worry as it sometimes can prove to be somewhat of a nuisance. It follows some of the other horses around nipping at them. Sometimes he displays this behavior constantly for extended periods of time. This also happens to the so-called “leader” horse, but mostly this leader horse puts up with his behavior. The troublemaker also has a tendency to tear down fences or break the water bucket and such things from time to time. But other than that he is the sweetest funniest big boy gelding. He loves people and he is very playful. He also functions as a therapy horse where he is the most sensitive gentle being.

Observation without judgment is the key!

I have on several occasions had the pleasure of being and communicating with this horse but I have never witnessed his troublemaking behavior, that is, until yesterday! I paid him and his small herd a visit, my friend wasn’t there, she is normally part of the herd, but this time I just came around to hang out with the horses in order to enjoy these lovelies for an hour or two.
The first thing I saw was our lovely friend in question tailgating the “leader” horse in the field nipping and biting his stomach and backside. They came straight toward me, they stopped in between and grazed a bit, but the constant nuisance of our friend continued.

I thought they were heading for me as I was hanging out in one of the big tractor tires that serve as their hey feeders. Right before they reached me they turned left and headed up to the water buckets. I felt this aggression and frustration in this normally so friendly horse’s behavior and was kinda puzzled. I hadn’t felt this aggression and frustration in this horse before. I was hanging out with one of the other horses by the tires just observing everything that was going on. 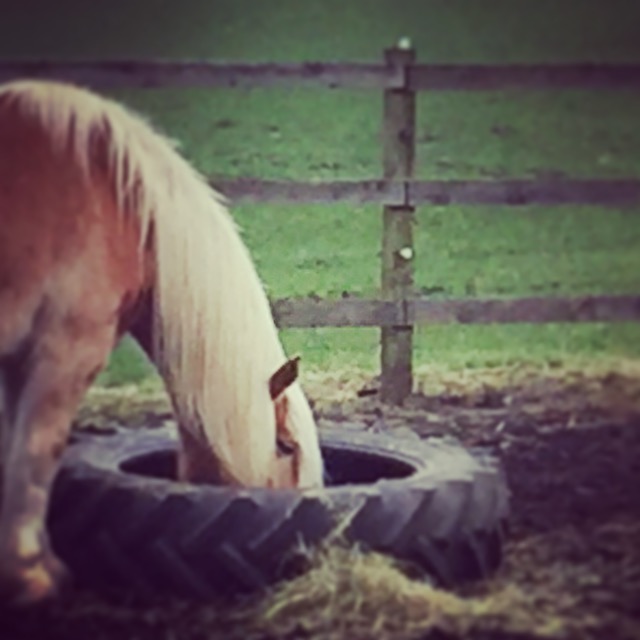 In the horse’s own time!

After a while, our friend came down to me. He is normally such a hoot and sweet lowing being and I love to hang out with him but he now turned his aggressive nuisance behavior on me. I am describing his behavior this way, as it isn’t a kind of aggressive behavior as such, not like normal aggressive behavior that horses can display. There was no intention of harm or threat. I didn’t feel afraid I just felt my boundaries overstepped again and again with a little bit of an aggressive and frustrated energy coming from the horse. First I decided to step out of his way but this didn’t help at all. So I decided to set my boundaries clearly with him by using my voice and my body language and that helped, he respected my “no”.

Then I got the space to fall back into my heart and tune into what all this was about. What I felt was;

“a very very sad and scared horse. I felt a small small boy getting upset because he couldn’t get to his mother; he was so scared almost anxiety like.”

I experienced his sadness, his aloneness and how he didn’t understand why he was kept away. Now all of that frustration, sadness, and uncertainty of what would happen had affected his behavioral pattern. He was asking for safety and attention, he was asking for a mother to stand close to, to hide behind, to nurture and protect him. Kinda like a small child who “hits the girl he likes” because he can’t find any other way to express his emotions. The same way this horse had adapted a behavioral pattern that was aggressive and a nuisance. Just like it happens with humans this horse would draw out a reaction when displaying this behavior that would reaffirm the rejection or loss. A negative affirmation of the trauma set to happen all over again.

It was breaking my heart so I asked for help for this horse. He began raising his upper muzzle as horses sometimes do when they have a tickle or smell a mare in heat. He did this five or six times, then he stood still with his head low. I was standing about a meter or two from him. Then after about 7-8 min, he yawned 3 times with his neck stretched out all the way and his jaws fully open. Licking and yawning happen often when horses release tension.

I let him be for a while beside me. He began nuzzling the bits of straw on the ground. We finished our sharing in this gentle manner and after that, he began drifting a bit further away from me so I ended my active engagement with him on this matter and just hung out.

Later I talked to my friend about it and she told me he was taken from his mother at 6 months old; I did not know this beforehand. The sadness that I had felt in him and the sadness of our world that causes and allow such trauma to happen touched me deeply. This also explains why the “leader” horse so gently puts up with his behavior most of the time.

It is our human sickness causing the trauma?

I know we as a human collective do far worse things to animals and each other but this sadness of a small boy, all the confusion and his lack of understanding is still breaking my heart. When will we realise that our actions always have an impact whether positive or negative? There is no “with this one it won’t matter”, it doesn’t exist! I long for the day that we will realize that it is our own societal unbalanced behaviour; our addiction to the clock on our wrists which goes directly against natures rules all in the name of efficiency and our insatiable thirst for the little green paper slips, both are man-made concepts and both are causing so much trauma to everyone; human, as well as, the rest of the inhabitants on this planet.

As long as we keep re-traumatizing the singularities we only add to our own unbalanced sickness individually and as a whole, causing even more suffering for both us and all our other than human friends.

The patience of wounded warriors!

What amazes me most in the aftermath of this experience is how well balanced a horse he is, how gentle and nurturing, and fun. He really is a sweet comidian that helps to release tension for others in no time. He is only about 5 or 6 years old, I believe.

Maybe our wounded warriors, who have the fortune to have the anchoring of an older spirit inside them, truly are the ones who most easily connect with others empathically. Cause this horse, this huge work horse with hooves almost like dinner plates, definitely knows how to tune in and touch others through his gentle and loving spirit.