When the Last Rhino is Scheduled to Leave!

You are looking at the very last male of the species of Northern White Rhino, he has armed guards 24/7 to try and keep him safe- but to what end! 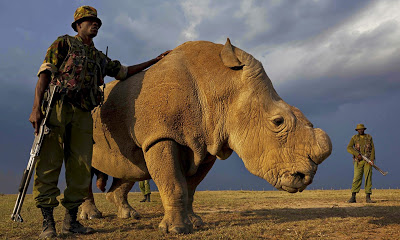 We have acknowledged that we need to mutilate him by cutting off his horns because if he keeps them- it’s like putting a gun to his head. But look at him, this gentle giant; with sadness written in his eyes and flesh. I cannot blame this species for not wanting to be a part of this Earth community anymore; I can not blame them for their decision to leave.

The pain of humanity’s vanity has cut too deep for too long for these beings; they no longer want to inhabit the same planet as Humans! But really who loses, when this creature finally leaves for good and takes it particular attributes with it? Ponder what special power the Rhino whispers to you, what energy it gives to the collective Earth community. The Magic is slowly dying out, leaving step by step and we let it! It hurts deeply and so it should.

Lately, other species of Rhino have too decided to leave. As of late April 2015 the Sumatran Rhino, above, is extinct in the wild. It is with true sadness my heart recognizes what is truly happening here and I would like to emphasize that these Rhinos leaving is not an ‘accident’ or the result of human evolution. It is a decision made collectively by a species; it is a conscious choice they have made- the effect of our human race’s indignant treatment of their kind. It is the effect of the suffering we both have and are still subjecting them to. 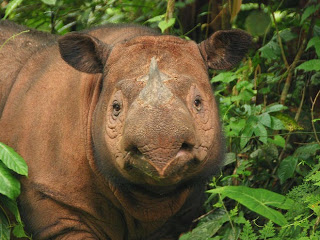 As a last attempt to save them the Sumatran Rhino also had their horns cut off in the end. It didn’t work obviously. They roamed their forest with half a heart as their visible scars of their castrated horns where both humiliating and visible to all. They did not get to rest or go in peace, their dignity was stripped and taken from them. The whole forest knew of their mutilation. They could not hide their sadness and the fear was constant and growing each day. It fell victim to a so-called trend, a disease of another species- humans and their insatiable thirst for health, beauty, and vitality! But what will happen when we learn that what just left was already serving us, and this Earth, with not only health, beauty, and vitality but also with love, gentleness and ‘strength of thick skin’; of withstanding. Not in any symbolic way; in a very real and grounded way, these animals held that for humanity.

It wasn’t that its skin wasn’t thick enough it was that it was too thick, to powerful! Their power was combined very uniquely with a gentleness that power rarely can incorporate. In some way it held too much of a promise of Love overcoming Power- something humans can’t stand at this point in time. Our species is unfortunately stuck in its immature greed for all things shiny or is it perhaps the fear that is driving our thirst; the fear of having to step down of our self-proclaimed throne of Nature. Again, I have to say, I cannot blame the Rhino for their choice to leave. I wish we had let them open us to their power earlier.

I pray for safe journeying to your homelands, for your peace and for your gathering of your whole family once more, so you may heal and find back your strength. We wanted what you had but didn’t realize you would have given it away freely, had we but known how to ask, no mutilation was necessary in the first place.

Farewell beautiful ones, thank you for what you did give, for your patience and for your wisdom to take care of yourself in the end.